Tuberculosis (TB) remains one of the deadliest diseases in the world. The World Health Organization (WHO) estimates that each year more than 10 million new cases of TB occur and approximately 2 million persons die from the disease[1]. Ninety-five per cent of TB cases occur in developing countries, where few resources are available to ensure proper treatment and where human immunodeficiency virus (HIV) infection may be common. It is estimated that between 19% and 43% of the world’s population is infected with Mycobacterium tuberculosis (Mtb) and 22 countries alone account for 80% of global cases. Worldwide, there are an estimated 500,000 cases of multidrug-resistant TB, of which 10% are TB with extensively drug-resistant strains. Nearly 2.7 million annual cases of tuberculosis occur in sub-Saharan Africa. This figure is rising rapidly, because of the AIDS epidemic that is particularly affecting this region of the world. Nearly 6.3 million annual cases of tuberculosis are reported in Asia. More than 250,000 of the annual cases occur in Eastern Europe. In France, there are nearly 5,000 new cases per year and about 900 deaths each year, with Guyana, Mayotte and Île-de-France being the regions most affected in terms of reporting rates.

Although the TB case rate has declined during the past few years, there remains a huge reservoir of individuals who are infected with Mtb. Without application of effective treatment for latent TB infection, new cases of tuberculosis can be expected to develop from within this group. TB is a social disease with medical implications. It has always occurred disproportionately among disadvantaged populations such as the homeless, malnourished, and crowded. Within the past decade it also has become clear that the spread of HIV infection and the immigration of persons from areas of high incidence have resulted in increased numbers of TB cases. 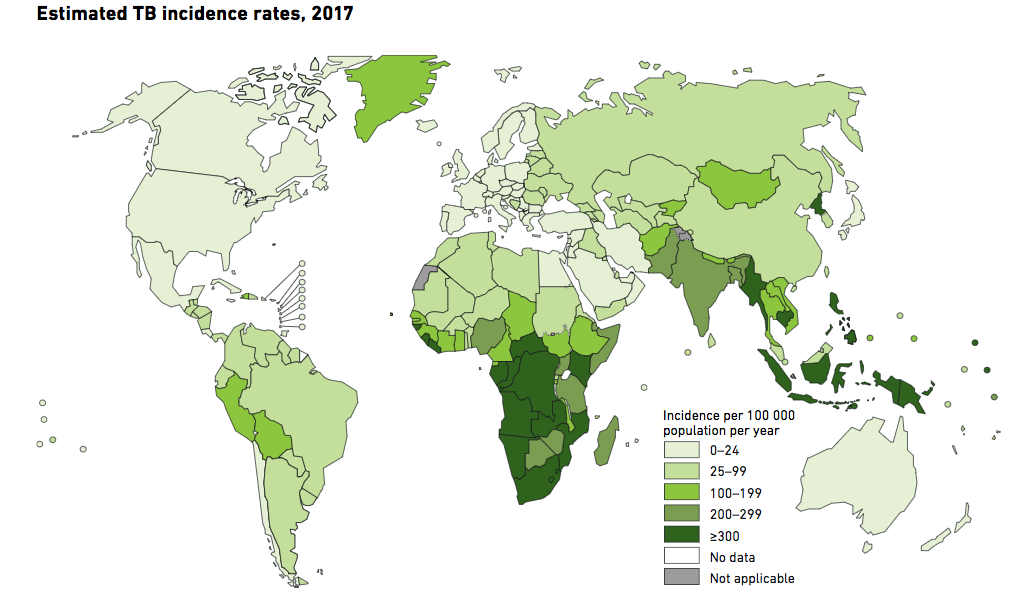 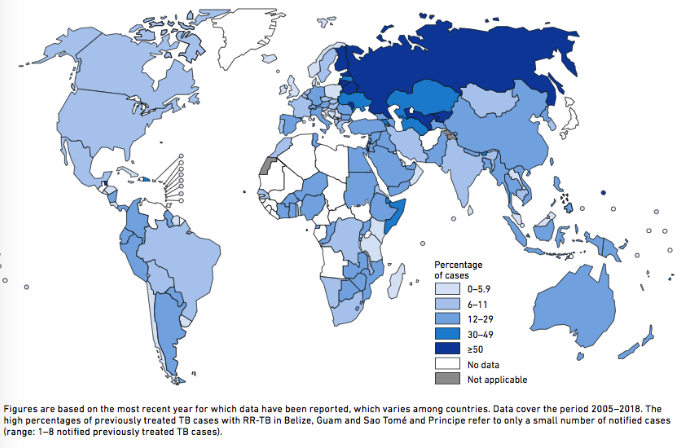 Percentage of previously treated MDR/RR-TB (WHO 2018)

According to the World Health Organization Tuberculosis Report 2018 [1], 9% of the new worldwide TB cases (889 thousand) were reported in China in 2017. The incidence rate of tuberculosis in China was estimated to 63 per 100 000 with a mortality rate of 2.6 per 100 000 (excluding HIV TB patients). The incidence rates in China are lower than those of high TB burden countries and global average. However, because of China’s large population (1 410 million) the burden of tuberculosis is still rather heavy.

The most active TB burden is in the west (Xinjiang is the region with the highest pulmonary TB incidence [2] ) with a downward trend in the middle and the least active in the east. The incidence rate in rural areas is much higher than that in the urban areas [2,3]. Internal migration from rural areas presents new challenges for tuberculosis control in Chinese cities where migrants are more likely to be associated with a high risk of tuberculosis and have less favourable treatment outcomes because of difficulties to access to health centres. Male patients are three times more likely to suffer from tuberculosis than female ones. The highest TB burden was found in the elderly [4]

High TB burden countries with high levels of treatment coverage in 2017 (>80%) included Brazil, China, the Russian Federation, Viet Nam and Zimbabwe. The Directly Observed Treatment, Short-Course (DOTS) strategy was introduced in 1991 in China. Treatment outcomes for new and relapse TB cases, for HIV negative and positive patients, respectively, in 2017, were 93% and 51%.

Drug-resistant TB is a persistent threat, 558 000 new cases (range, 483 000–639 000) of rifampicin-resistant TB (RR-TB) emerging in 2017, of which almost half were in three countries: India (24%), China (13%) and the Russian Federation (10%). Chinese MDR patients represented 7.1% of the new cases and 24% of the relapse cases. Enrolments represented 45% of the number of notified MDR/RR-TB cases in 2017, in China. This low percentage shows that progress in detection is outstripping capacity to provide treatment; they may also reflect weaknesses in data collection systems and difficulties for patients to access to health centres. In these settings the risk of transmission of DR-TB is high and efforts are needed to rapidly close enrolment/notification gaps. Treatment success of MDR/RR TB cases was 41% in China. This was due to the high rates of loss to follow-up or missing data about treatment outcome (13% and 32%).

Tuberculosis is spread from person to person through the air by droplet nuclei particles that contain M. tb. Droplet nuclei are produced when persons with pulmonary or laryngeal tuberculosis cough, sneeze, speak, or sing. They also may be produced by aerosol treatments, sputum induction, aerosolization during bronchoscopy, and through manipulation of lesions or processing of tissue or secretions in the hospital or laboratory.

Four factors determine the likelihood of transmission of M. tb: (1) the number of organisms being expelled into the air, (2) the concentration of organisms in the air determined by the volume of the space and its ventilation, (3) the length of time an exposed person breathes the contaminated air, and (4) presumably the immune status of the exposed individual.

The most important means to reduce the number of bacilli released into the air is by treating the patient with effective anti-tuberculosis chemotherapy. If masks are to be used on coughing patients with infectious tuberculosis, they should be fabricated to filter droplet nuclei and moldedmoulded to fit tightly around the nose and mouth (FFP2 masks).

Traditional strain-typing techniques (IS6110 RFLP [2], spoligotyping [3] and MIRU-VNTR [4]) identify genotypes of M. tb isolates and define outbreaks. However, these techniques can be inaccurate when tracing routes of transmission or determining whether isolates with minor differences belong to an outbreak. WGS can identify SNP differences in strains that were classified as identical by other techniques, and can trace strain transmission by delineating the order of nucleotide changes. SpolPred software can predict spoligotypes from WGS data [5]., howeverHowever, obtaining MIRU-VNTR profiles from WGS data is not straightforward. Emerging technologies promising long sequence fragments might solve this difficultyissue.

The success of spoligotyping and MIRU-VNTR42–46 relied upon standardised protocols that allowed results to be compared among laboratories and collated into searchable web-based databases. Genomic analysis of SNP differences between outbreak strains shows precise phylogenetic relations [7]. howeverHowever, improvements are underway for analysing WGS data.

The mutation rate of M. tuberculosis complex (MTBC) bacteria is important for defining outbreak clusters, lines of transmission, and bacterial evolution. In transmission studies, there is agreement consensus among estimates of 0.3–0.5 SNP changes per year per genome, which are consistent with the estimate of 0.2 SNPs per genome per year based on DNA from ancient isolates [8].